Not that we didn’t have one already.  As Christians know, the Church is the term we use for the people, and not just the building.  Catholics have worshipped in Yanchep-Two Rocks since the seventies – first at the marina, then in the YDHS library, then in the old sheep-shearing shed converted by the Anglican Church into St James’s Church, and when that was removed (I heard a rumour it was taken to the wheatbelt town of Southern Cross, but that may be apocryphal), at the Yanchep Community Centre, where we currently celebrate Mass.

But it’s wonderful news that the Archdiocese has committed to investing in land in the Yanchep-Two Rocks area.  This week, Nick Perrignon, Principal of Acumen Development Solutions, announced that a Catholic Church would be built on the hill overlooking Beachside Parade in Capricorn Estate.

Even more wonderful is the fact that we will have a Church building before a school, because that puts our priorities in the right order.  Everything we have is from God, and to him we should first and foremost give right praise.  If we get that first commandment right – to love the Lord our God with our whole heart, soul, mind and strength (Mk 12:30), the rest will follow (or it will if we’re loving God correctly – note to the community: “We’re not all paedophiles”)!  What I mean by ‘the rest’, is loving our neighbour, which includes building schools and reaching out to the sick, the lonely, and those in need.

But having a Church building enables us to do and be so much more.  It means we can have a permanent place to honour God in the Holy Eucharist.  It means we can have a much more visible presence in the Community and (we hope) serve the Community better.  Already we are involved in visiting the frail and aged at Bethanie Beachside (which is run by our friends, the Church of Christ), and we have also had a bread distribution programme going for many years (courtesy of Bakers Delight). But it would be nice to hear from members of the Yanchep Two Rocks Community about other areas of need, especially your prayer requests.

If the life of our Church is like a recapitulation of Scripture, having our own church building will be like the difference between the Israelites wandering around in the desert for years on end and finally building the Temple under Solomon.  Or that’s how it feels, because we’ve been praying for this for so very long.

I will endeavour to keep you posted about the actual timeline of the building.  So far, all discussions have been in commercial confidence and therefore we have to wait until an official announcement from the Archdiocese.  Or as we could say …

On the idea of ‘Church’, here are some snippets from the Catechism …

751 The word “Church” (Latin ecclesia, from the Greek ek-ka-lein, to “call out of”) means a convocation or an assembly. It designates the assemblies of the people, usually for a religious purpose. 139 Ekklesia is used frequently in the Greek Old Testament for the assembly of the Chosen People before God, above all for their assembly on Mount Sinai where Israel received the Law and was established by God as his holy people. By calling itself “Church,” the first community of Christian believers recognized itself as heir to that assembly. In the Church, God is “calling together” his people from all the ends of the earth. the equivalent Greek term Kyriake, from which the English word Church and the German Kirche are derived, means “what belongs to the Lord.”

752 In Christian usage, the word “church” designates the liturgical assembly, but also the local community or the whole universal community of believers. These three meanings are inseparable. “The Church” is the People that God gathers in the whole world. She exists in local communities and is made real as a liturgical, above all a Eucharistic, assembly. She draws her life from the word and the Body of Christ and so herself becomes Christ’s Body. 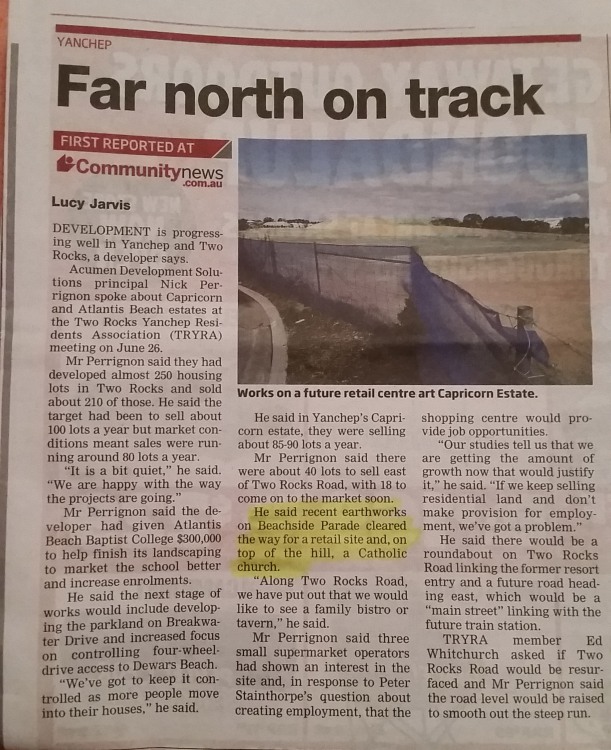 Wishing all of my online followers (especially those in Yanchep-Two Rocks) a most blessed, peaceful and joyful Christmas!  God became flesh out of love for us – so that, attaching ourselves to Him, we might come to share in his glory.  I pray for all of you, that Christ will make himself increasingly known to you, that you can share more and more in his divine life and love.

At the time appointed by God, the only Son of the Father, the eternal Word, that is, the Word and substantial Image of the Father, became incarnate; without losing his divine nature he has assumed human nature. (CCC 479)

It was so beautiful to be able to celebrate the birth of Christ our Saviour with a large crowd at the Yanchep Community Centre last night!  As Fr Augustine said, there was no room in Bethlehem for the Saviour, and there was little room to sit down in the Community Centre.  Please pray that we will be able to find a permanent, larger venue for our Church, and please pray that we can finally have a Pastoral Council to raise funds to do so!  Thank you to all those who joined us for Mass!

I have to go and cook a turkey now, so if you would like some extra reflections on Christmas, I will leave you with these links:

The Yanchep Christmas Mass will be at 6 p.m. on Christmas Eve, 24th December at the Yanchep Community Centre in Lagoon Drive.  The next closest Mass venue is at St Andrew’s Clarkson and their Mass times are here.

Guilderton Christmas Mass will be at the usual 8 a.m.

Lancelin Christmas Mass will be at 10 a.m.

If you know anyone in our local area who doesn’t look forward to Christmas because it reminds them of their sadness, let them know that they can join us for lunch!  Perhaps they have lost a loved one.  Perhaps their family isn’t speaking to them.  Or perhaps they are far away from their friends and relations.

Whatever the reason is for their loneliness, they need to know that God loves them with a tender love and wants to reach out to them to share his abundant joy.

Today is the most solemn day of the year, and Catholics spend it in prayer, fasting and abstinence.  Why do we do it?  What is the significance of Jesus dying on the cross?

Billy Kangas discusses this question on his blog

One day I came in and there was a giant banner hanging over the pulpit that read, “Why did Jesus die?” At first I didn’t take too much notice of it, but as I sat alone in the room for the next two hours the question began to gnaw at me. It got under my skin, it infected me. It became more than a question, it became a challenge. The question “why did Jesus die,” eventually drove me to question my faith, rethink my dogma and eventually set me on a path that ended in my joining the Catholic Church in the 2013 Easter Vigil.

Kangas goes on to explain the difference between the Protestant ‘penal substitution’ explanation (Jesus has to suffer for us because God is angry) and the Catholic view:

Augustine realized that God could have saved us with his power. God is fully capable of overpowering any creature, sin, vice, or person. God chooses to overcome with Christ’s death because God wanted to create a life with humanity where they could participate in God’s saving action with Him. A pure exercise of divine power would not have given humanity a way of participation. God used the shedding of blood because he wanted to give humanity a path of salvation that they could imitate, and even be united in through the sacramental life of the church.

Although men and women are freed from death and forgiven of their sins, they are not made perfect when they are baptized into Christ. People still fall into temptation and sin. Augustine also viewed the Cross as a sure guide for endurance in Christ. God’s action in Christ’s life, and death is the starting point that demonstrates what true obedience to God looks like. The salvation which is inaugurated on the cross is worked out as God’s grace works actively in us, and is made perfect as the Church as a whole is saved from even their sinful desires through the purgative life of the saints in unity with one another in Christ. (c.f. Augustine, Sermon 222; 232; 233)

I have put together a booklet for The Lord’s Passion, which we remember this afternoon at 3 p.m.  Please join us for this and Stations of the Cross this morning at 10 a.m.