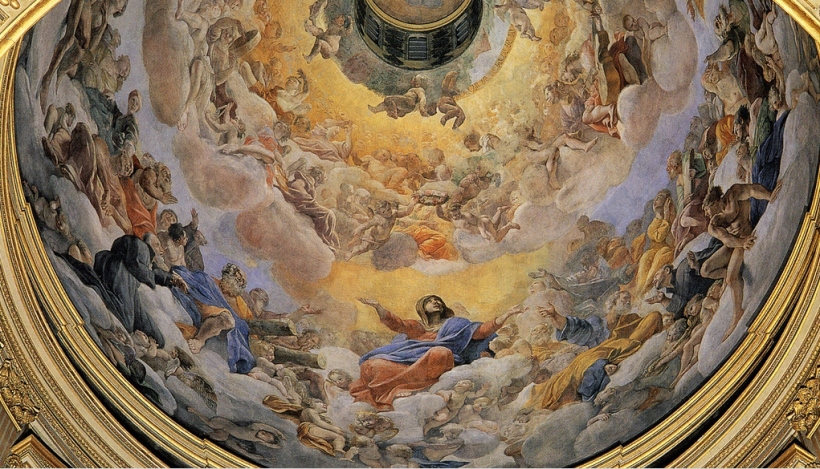 Someone who is near and dear to me recently asked me this question:  “Why is it that you always have to bring God or the Church into the conversation?  We don’t want to hear what a bunch of men in Rome think about everything. We want to hear the real you.  Sometimes we think we don’t know who you are.  Why is it that you can’t think for yourself?”

At first this question took me rather aback.  Firstly, it’s not true.  I talk about many topics without referring specifically to my faith.  Agreed, my Facebook page is full of Christian commentary, but all day at work, I generally avoid explicitly bringing up my faith, and tend to let the John 10:10 quote at the bottom of my emails and the Columban calendar art above my desk speak for themselves.  Nevertheless, the question is an important one, and the answer essential to understanding the Christian worldview.

I can see that, looking at my friend’s question from her point of view, it must appear that my faith is some sort of enthusiasm of mine, in the same vein as an addiction to, say, Warhammer fantasy battles.  To her it must seem, if I drop into the conversation some mention of archangels, thuribles, Palestrina, St Servatius the Ice Saint, The Enchiridion or, come to think of it, that spitting gargoyle on Notre Dame Cathedral – like just so much jargon-bombing by a Warhammer-maniac about the Necrons or the Eldar, the Ordo Hereticus, and the parallel dimension of the Warp.  To my friend, I must come across as one of those ghastly bores who cannot stop talking about their favourite hobby and inflicting it on all comers.

Add to this the perception by outsiders that the Church is just another organisation, in much the same way as Games Workshop is the organisation behind the Warhammer brand, and you will understand my friend’s incomprehension.

This is what she doesn’t get.  The church is not an organisation.  Rather, it’s an organism.  There is a unique relationship between the baptised and Christ, that has to be entered into in order to be understood.  Serious Christians are not just following Christ, as one might follow a great leader.  Serious Christians have a living and active relationship with Him as a person, strengthened by his Word and, on a physical level, by receiving his physical Body into our physical body under the form of the Holy Eucharist.  Each one of us becomes a cell in His mystical body; the Holy Spirit is the lifeblood: He empowers us by delivering the spiritual equivalent of gluose and oxygen to each cell.  At the same time, all the cells are implicated in each other – each of us cooperates in the plan of Christ, who is the head of this mystical body.  And the body functions most harmoniously when all the cells are carrying out their appointed tasks in alignment with the direction of the head.

In fact, when I receive Holy Communion, I make a point of meditating quietly on asking Christ to be absorbed physically into my body, to insert himself into my DNA, as it were, so that I can become more like Him and be his presence in the world.  For I want to be able to say like Paul, “I have been crucified with Christ.  It is no longer I that live, but Christ who lives in me (Gal. 2:20).”  Yes, I know I haven’t perfectly actualised that statement yet, but I’m working on it.

The cells of this body do not only include us, who are alive on this planet right here, right now – the Ecclesia Militans, who are engaged in the present struggle against sin and evil, but also those who have passed beyond this life: those who have arrived in heaven – the glorious Church Triumphant – and those who have died but are going through a final cleansing to rid themselves of any remaining attachments to sin – the Suffering Church in Purgatory.  So the body of Christ is not limited by space and time, and all the cells are united in Communio as a family.  There is also a communication system, a spiritual nervous system called prayer that unites all the cells with one another, and using this method we can ask the other cells to intercede for us to the head or, using our prayer superhighway, we can talk directly with the head ourselves.  The loving friendship with God developed in prayer is something so real, so palpable, so experienced, so immersive, that it would be an act of disloyalty to pretend that this intimate interaction does not exist.

So when my friend asks me to stop ‘referencing religion’, essentially they are asking me not to talk about the deepest core of my being and my closest familial relationship.  I think that, far from the person’s claim to want to know the real me, this sort of request doesn’t respect who I am at all, and reveals a mind closed-off to genuine communication.  To them, Christ is perceived as a threat to their personal freedom, someone who is so other to them that they experience Him as an oppression, someone whom they have to ward off by setting boundaries on conversation.  But if one really wants to get to know someone, to show communio with another person in a genuine and Christ-like way, one has to be sincerely interested in them, and we can only do this in conversation by drawing the person out of themselves, and listening to them attentively, while at the same time sharing from one’s own experience in return, so that the conversation doesn’t give the impression of an interrogation.  Christ-like love is generous and not self-protective.

Returning to the original question, I would have to point out that the person who proposed it is embedded in a worldview that centres everything around her ego.  That is why my way of expressing myself sounds so alien to her, since Christianity tends to play down the ego and focus outward, on the mission of the Gospel, with its two-pronged love of God and love of neighbour.  Typical of Christian thought are self-deprecating phrases such as “Whoever finds his life will lose it, and whoever loses his life for my sake will find it,” (Mt 10:39) or, John the Baptist’s, “He must increase, but I must decrease,” (John 3:30).  My friend’s Nietzscheanism, however, is replete with self-aggrandizing statements: “Ego is the very essence of a noble soul” (Beyond Good and Evil, Ch. 9) or “There cannot be a God because if there were one, I could not believe that I was not He.” (Wenn es Götter gäbe, wie hielte ich’s aus, kein Gott zu sein! Also gibt es keine Götter.)  (Thus spoke Zarathustra, Part II, ch.24)

So I would encourage my friend to be more aware of the effect her worldview is having on her soul.  Is it helping her to grow in unconditional love and respect for the other, or is it narrowing and confining her in a prison of her own making?

This is an expanded version of the short introductory talk I gave on day three of the WBC conference.

One thought on “Can Catholics think for themselves?”