Jonathan Haidt, the social psychologist and author of The Righteous Mind: Why Good People are Divided by Politics and Religion, is fascinated by the liberal-conservative divisions in society.  Although he leans slightly left himself, he describes himself now as having ‘stepped out of the game’, especially since his research among widely divergent cultures led him to revise his preconceptions about conservatives.  Sick and tired of the rancour and demonization so characteristic of social media culture, he has been trying to find ways to help people at opposite ends of the political spectrum understand one another.

What Haidt discovered through his research in a number of different countries, was that there are at least six foundational aspects to the way we reason about morality, common to all humans.  He compares them to our having an audio equaliser with six slider switches, each of which can have the sensitivity turned up to varying degrees.  These switches are:

What he didn’t expect to find, was that left-leaning people prioritised the first two: care and fairness, but right-leaning people endorsed all six approximately evenly.  As a follow-up, he asked his subjects to answer questions while role-playing as people holding ideological beliefs opposite to their own in real life, a technique known as an Ideological Turing Test.  He found that it was the right-leaning people who could correctly explain and defend the beliefs of the left-leaners, while the progressives had great difficulty expressing and understanding the positions of the conservatives.

Haidt argues that for most people, moral choices are decisions based on intuitions or emotional responses, rather than on carefully reasoned arguments.  We are all guilty of confirmation bias: our brains are like lawyers or press secretaries for our emotions, and we send them out scurrying to find the evidence which supports our emotional responses.  The ubiquity of Google now gives us unlimited scope for rapid confirmation of whatever wacky idea our emotions want to defend.  Haidt sees this as ramping up the heat, nastiness and rancour in our political and ideological debates, especially as many of us choose to inhabit ideological enclaves of like-minded people.  He describes the cure as follows:

Individual reasoning is post hoc and justificatory;  individual reasoning is not reliable because of confirmation bias.  The only cure for confirmation bias is other people.  So if you bring people together who disagree, and they have a sense of friendship, family, having something in common, having an institution to preserve, they can challenge each other’s reasoning, and this is the way that the scientific world is supposed to work.  We end up being forced to work together, challenging each other’s’ confirmation biases – and truth emerges.    And this is a place where I think the Christians have it right, because they’re always talking about how flawed we are. (Interview with Bill Moyers)

So why am I bringing this up?  In today’s Gospel, we read what is probably the single most influential speech of all time, Jesus’s Sermon on the Mount .  Quoted for 2,000 years and spreading out to every country of the world, the Sermon on the Mount has had an incalculable influence on our morality, particularly the morality of Western Civilisation.  Unfortunately, most children today will never encounter the Gospel in their school curriculum, and will through no fault of their own, be unaware of the transcendent teachings it contains.

Today’s Gospel concentrates on the eight Beatitudes: those things that will help us to be happy in this life and the next.  Of course, they transcend Haidt’s six aspects of morality, but we can also link the Beatitudes to Haidt’s universal moral categories and find some correspondence.  The point about the Sermon on the Mount is that Jesus is inviting us to transcend our tribal and egocentric emotional responses and make conscious choices that place God and our neighbour at the centre of our choices.

But I need to return to my main point, which is about how we can be practical peacemakers, knowing what we know about Haidt’s research into confirmation bias.  It’s supremely important for us as Christians not to retreat into the bubble of our Christian ideological and religious enclave (sometimes called The Benedict Option).  Sure, every Christian should surround him- or herself with Christian friends who provide the mutual support of being collectively loyal to Christ and faithful to the Magisterium.

But we also need to make sure that we encounter all sorts of ‘others’ so that we can learn to understand how they think, respectfully talk about things we disagree on, gently challenge their confirmation bias and create that space where we can be friends in spite of our differences.

By the way, if you’re interested in the fresco above, it’s a detail of the ceiling of St Ulrich in Gröden in the Italian Alps.  The whole thing is quite stunning. 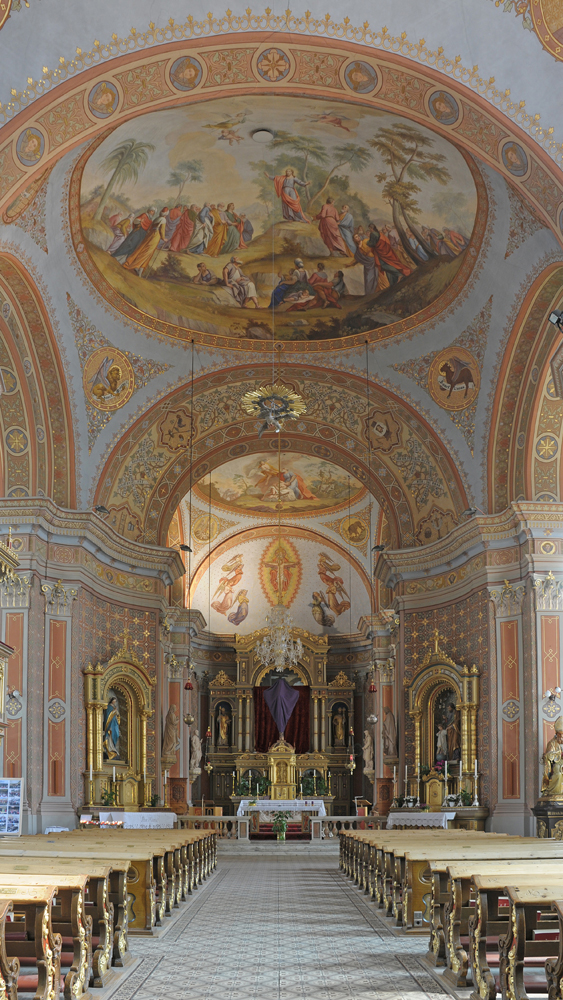 5 thoughts on “4th Sunday, Year A | Being peacemakers in a divided society”