At the ecumenical Bible Study group I attend, we steer very carefully away from any discussion of the Early Church Councils.  If I sail too close to these shores, the usual protestation is, “But where is it in the Bible?” My answer is, “The decisions of the Church Councils are overflowing with quotes from the Bible.  What Church Councils are attempting is the correct interpretation of Scripture.  Just like a geometry theorem, each teaching has to proceed from previous teachings derived from Holy Scripture using deductive logic, without contradicting the previous steps.”

Take for example the First Council of Ephesus.  This was sparked by a popular devotion to the Virgin Mary, which called her “Theotokos” (Θεοτόκος) or God-bearer.  “You can’t say that!” objected one of the factions, led by Nestorius, Archbishop of Constantinople.  “You have to say “Christotokos” (Χριστοτόκος), i.e. Christ-bearer.  Essentially, the argument was not really about who Mary was, but about who Christ was.

This may seem a little arcane, but it makes a huge difference to our understanding of Christ.  Already at the Council of Nicaea in AD 325, it had been affirmed that Jesus was fully divine and of the same essence as the Father (Homoousios, Greek: ὁμοούσιος).   But now the question was whether Christ had one nature or two, one personhood or two, and so forth.

If one drew it as a punnet square, like a problem in genetics, one could visualise the different options like this.  During the 5th century there were a variety of theories milling around, but only one was correct.

What on earth do we mean by these words, “nature” and “person”?

Nature (physis, Greek: φύσις) refers to the kind of ‘being’ He is, divine or human.

To put it more concretely, these were the different positions on the interpretation of Christ’s death: 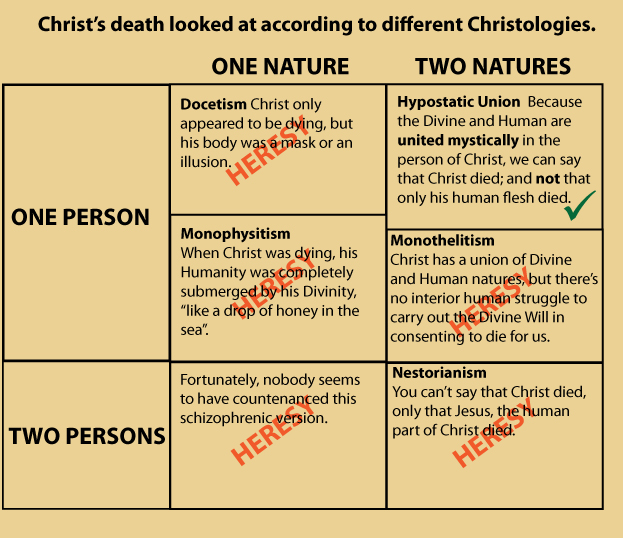 So, at the Council of Ephesus, Cyril of Alexandria and Nestorius faced off against each other (well, sort of; actually Nestorius neglected to show up to answer the charges made against him).  And the argument, in summary went like this:

We too ought to follow these words and these teachings and consider what is meant by saying that the Word from God took flesh and became man. For we do not say that the nature of the Word was changed and became flesh, nor that he was turned into a whole man made of body and soul. Rather do we claim that the Word in an unspeakable, inconceivable manner united to himself hypostatically flesh enlivened by a rational soul, and so became man and was called son of man, not by God’s will alone or good pleasure, nor by the assumption of a person alone. Rather did two different natures come together to form a unity, and from both arose one Christ, one Son. It was not as though the distinctness of the natures was destroyed by the union, but divinity and humanity together made perfect for us one Lord and one Christ, together marvellously and mysteriously combining to form a unity. So he who existed and was begotten of the Father before all ages is also said to have been begotten according to the flesh of a woman, without the divine nature either beginning to exist in the holy virgin, or needing of itself a second begetting after that from his Father.

In a similar way we say that he suffered and rose again, not that the Word of God suffered blows or piercing with nails or any other wounds in his own nature (for the divine, being without a body, is incapable of suffering), but because the body which became his own suffered these things, he is said to have suffered them for us. For he was without suffering, while his body suffered. Something similar is true of his dying. For by nature the Word of God is of itself immortal and incorruptible and life and life-giving, but since on the other hand his own body by God’s grace, as the apostle says, tasted death for all, the Word is said to have suffered death for us, not as if he himself had experienced death as far as his own nature was concerned (it would be sheer lunacy to say or to think that), but because, as I have just said, his flesh tasted death. So too, when his flesh was raised to life, we refer to this again as his resurrection, not as though he had fallen into corruption—God forbid—but because his body had been raised again.

[As Brother Michael, MICM summarises it, “The crux of the argument of the Alexandrian bishop is that if the person who died for us on Calvary was not God, then, indeed, we may despair; for then we have not been redeemed, since no mere man could have paid such a price.”]

To this, Nestorius replied with glorious self-righteousness:

Nestorius sends greeting in the Lord to the most religious and reverend fellow-minister Cyril. I pass over the insults against us contained in your extraordinary letter. They will, I think, be cured by my patience and by the answer which events will offer in the course of time …

… For when he was about to mention the death, to prevent anyone supposing that God the Word suffered, he says “Christ”, which is a title that expresses in one person both the impassible and the passible natures, in order that Christ might be called without impropriety both impassible and passible;  impassible in godhead, passible in the nature of his body…Ten thousand other expressions witness to the human race that they should not think that it was the godhead of the Son that was recently killed but the flesh which was joined to the nature of the godhead. 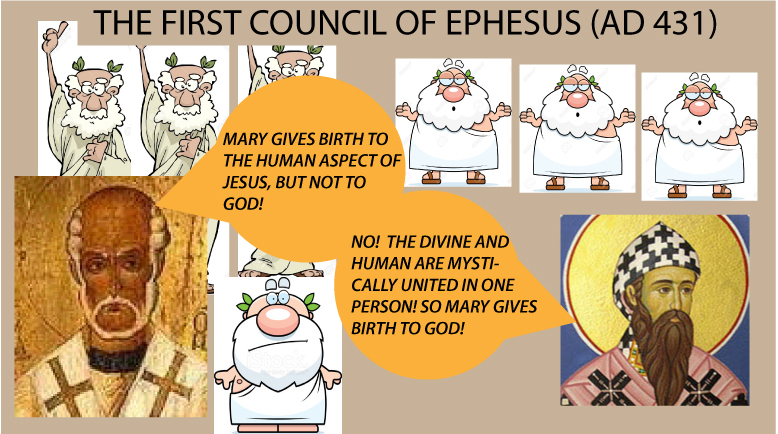 After much argy-bargy between the parties, including a situation where John of Antioch and his team from the Antiochene School arrived and proceeded to set up a rival synod, Nestorius’s teachings were condemned by the Council.

We have found him out thinking and speaking in an impious fashion, from his letters, from his writings that have been read out, and from the things that he has recently said in this metropolis which have been witnessed to by others; and as a result we have been compelled of necessity both by
—the canons and by
—the letter of our most holy father and fellow servant Celestine, bishop of the church of the Romans, to issue this sad condemnation against him, though we do so with many tears.

Our lord Jesus Christ, who has been blasphemed by him, has determined through this most holy synod that the same Nestorius should be stripped of his episcopal dignity and removed from the college of priests.

The Coptic Acts of the Council of Ephesus tell us that there was great rejoicing in the streets:

… gathered outside the church doors, in enthusiastic anticipation of the assembly’s decision, was what seemed to be the entire population of Ephesus. As soon as the news of what was decided leaked through the portals, the rejoicing was so unparalleled that no historian has failed to report it. The whole city became as though sun-lit with torches, and devotional pageantry exploded in the streets. (Source)

Another win for the people!  They had instinctively known that Mary was worthy of veneration as Mother of God!  And how much more wholesome that they were rejoicing about the Theotokos than yelling, as in Acts 19:28 “Great is Diana of the Ephesians!”

We confess, then, our lord Jesus Christ, the only begotten Son of God perfect God and perfect man of a rational soul and a body, begotten before all ages from the Father in his godhead, the same in the last days, for us and for our salvation, born of Mary the virgin, according to his humanity, one and the same consubstantial with the Father in godhead and consubstantial with us in humanity, for a union of two natures took place. Therefore we confess one Christ, one Son, one Lord. According to this understanding of the unconfused union, we confess the holy virgin to be the mother of God because God the Word took flesh and became man and from his very conception united to himself the temple he took from her.

And Nestorius, poor chap, was exiled to upper Egypt, where he died in obscurity.

So we see how the early Church, in thinking about Mary, was led to understand the Nature and Personhood of Christ more precisely.  My ecumenical Bible Study group is a little nervous that thinking about the role of Mary might diminish Christ in some way.  The reverse is true – she always leads us to a greater understanding of Christ.