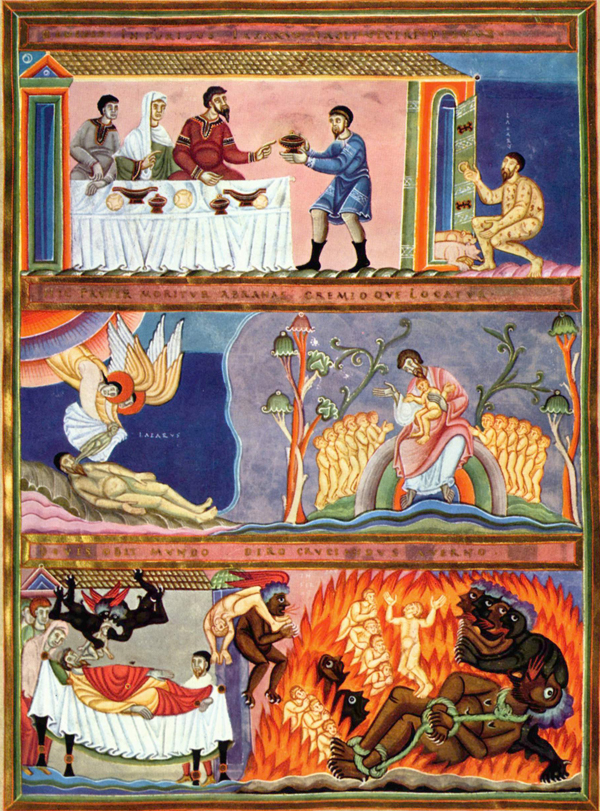 The Parable of the Rich Man and Lazarus, Illumination from the Codex Aureus of Echternach, 1035-1040, German National Museum, Nürnberg. Top panel: Lazarus at the rich man’s door Middle panel: Lazarus’ soul is carried to Paradise by two angels; Lazarus in Abraham’s bosom Bottom panel: Dives’ soul is carried off by two devils to Hell; Dives is tortured in Hades.

This week’s Gospel from Luke 16 should be compulsory reading for all.  Jesus tells a parable in which he contrasts a poor man, Lazarus, ‘covered with sores’, who goes hungry and unnoticed outside the gate of a rich man who enjoys a life of ease and comfort.  After the rich man dies, he finds himself in torment in Hades, not because of any particular cruelty he has meted out, but merely because he has been totally indifferent to the suffering of the man who lay at his gate.  Abraham says to him, “My son, remember that during your life good things came your way, just as bad things came the way of Lazarus.  Now he is being comforted while you are in agony.”

It’s easy in a country like Australia which has an advanced system of welfare and safety nets, to avoid being confronted with real poverty.  And sometimes, social welfare systems are so generous that they have the unintended effect of cementing and rewarding dysfunctional behaviours.  Hence the current conversation about whether school attendance should be a requirement for receiving family welfare.  But it is largely because Australia was founded on the sort of Judaeo-Christian principles explained in this parable and in the first reading from the prophet Amos, that it has had such a commitment to justice and a fair go for everyone.

At the moment I am in Cape Town, South Africa, where it almost impossible to be unaware of the poor around you, and there is a huge gulf between the haves and the have-nots.  I am well aware that I am more like the rich man in the parable when I am visiting here, so I am making an effort not to be indifferent.

On my way to Mass in the morning, I pass by a small park where I used to play as a child.  In this park lives a woman called Ursula, often accompanied by her friend Anthony.  Both Ursula and Anthony have mental health problems.  As I arrive, Anthony is sweeping the soil around the park bench, behind which is a bundle of plastic bags containing all their worldly goods.

“Good morning, Ursula.  How are you today?”  “Hello lady.  Can’t complain.”  “It looks as if it might rain today.  Where do you go if it rains?”  “I stay here.  I come from Somerset East, but I live here now.”  “I can see someone has given you some chicken.  Are you going to cook it?”  “No it’s cooked already.”  (It looks raw and it still in a polystyrene meat tray.)  “Oh well, here’s a sandwich for your breakfast, if you like.”  “Thank you, lady, I appreciate it.” “Hope you have a lovely day.”

Then there is Martin, who has come to South Africa from the DRC.  Every morning, Martin comes to Mass at Nazareth House, and picks up a sandwich from the nuns at the convent in exchange for some light duties.  After Mass, Martin walks up the steep hill to the Kwikspar, wheeling his travel luggage behind him, and all the way, carrying on a lively conversation with himself in French.  I think the Kwikspar might give away some out-of-code items.  At night, Martin stays at one of the homeless shelters which fortunately are available in this area for those who want to make use of them.

The third friend I have made here is one of the carers at Nazareth House.  I will call her Nomandla (not her real name).  Nomandla’s problem is an example of the structural problems in the South African wage system.  For 15 twelve-hour days a month, Nomandla earns R3,000 (that’s about AUD300).  So her weekly wage is approximately R750 or $75.  How is this possibly a living wage?  Nomandla is also supporting her son, who is studying at UWC to be a lawyer and will graduate in 2018.  Nomandla has a grade 12 education, but because of family circumstances, never had the opportunity to study further.  She would like to upgrade her skills and study nursing as soon as her son has graduated.  I am hoping I can help Nomandla achieve this goal.  If anyone is interested in this, I like the idea of direct action without going through all the administration costs involved in charitable donations, so please contact me.

I should also mention that Catholic Welfare and Development have a number of outreach programs here in the Western Cape, if you would like to donate to them.