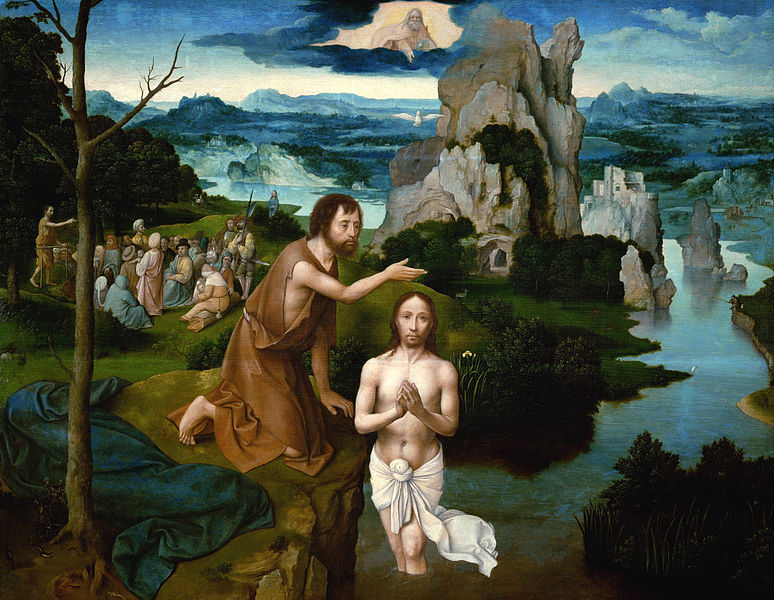 Fooled you with the title!  No I’m not going to talk about the 18th Century Age of (so-called) Enlightenment which was a reaction against the excesses of Monarchical power, the Thirty Years War and its ilk.  But I am going to talk about the meaning of Baptism and the history of the feast we celebrate today: The Baptism of the Lord.  It was as late as 1969 that this celebration was allocated to the First Sunday after Epiphany by Pope Paul VI, but its history dates back much further and provides an important milestone in linking the celebrations of the Eastern Orthodox and the Catholic Church.

In the Western Church, the focus of Epiphany on 6th January (or the Sunday after 1st January) is on the revelation of Christ to the Gentiles, represented by the Magi.  But in the Early Church, Epiphany marked the revelation of God to mankind as Trinity.  At his Baptism, we see all three persons of the triune God in action: Christ being affirmed by his Father as the Beloved Son and the Holy Spirit descending on him in the form of a dove.  In the Early Church, Epiphany was also known as the Feast of Holy Lights.  The Holy Lights refer to the many candles which illuminated the celebration of the Baptism of Catechumens (new converts) which occurred on the same day. But the deeper meaning is that of the illumination or enlightenment which Baptism brings.  There is a wonderful homily on Baptism given by St Gregory of Nazianzus, Archbishop of Constantinople, on 6th January in the year AD 381 (sorry, I refuse to give the politically correct CE).  St Gregory keeps us spellbound by his mystical description of Baptism.  Baptism is God’s gift to those of us who have been chosen to share heaven with him (he would like to choose us all, but out of respect for us gives us the freedom to reject his offer).  Over to Gregory:

I.  Yesterday we kept high Festival on the illustrious Day of the Holy Lights; for it was fitting that rejoicings should be kept for our Salvation, and that far more than for weddings and birthdays, and namedays, and house-warmings, and registrations of children, and anniversaries, and all the other festivities that men observe for their earthly friends. And now today let us discourse briefly concerning Baptism, and the benefits which accrue to us therefrom, even though our discourse yesterday spoke of it cursorily; partly because the time pressed us hard, and partly because the sermon had to avoid tediousness. For too great length in a sermon is as much an enemy to people’s ears, as too much food is to their bodies….[priests take note!]  It will be worth your while to apply your minds to what we say, and to receive our discourse on so important a subject not perfunctorily, but with ready mind, since to know the power of this Sacrament is itself Enlightenment.

II.  The Word recognizes three Births for us; namely, the natural birth, that of Baptism, and that of the Resurrection …

III. Concerning two of these births, the first and the last, we have not to speak on the present occasion. Let us discourse upon the second, which is now necessary for us, and which gives its name to the Feast of the Lights.  Illumination [He’s talking about Baptism] is the splendour of souls, the conversion of the life, the question put to the Godward conscience. It is the aid to our weakness, the renunciation of the flesh, the following of the Spirit, the fellowship of the Word, the improvement of the creature, the overwhelming of sin, the participation of light, the dissolution of darkness. It is the carriage to God, the dying with Christ, the perfecting of the mind, the bulwark of Faith, the key of the Kingdom of heaven, the change of life, the removal of slavery, the loosing of chains, the remodelling of the whole man. Why should I go into further detail? Illumination is the greatest and most magnificent of the Gifts of God. For just as we speak of the Holy of Holies, and the Song of Songs, as more comprehensive and more excellent than others, so is this called Illumination, as being more holy than any other illumination which we possess.

IV.  And as Christ the Giver of it is called by many various names, so too is this Gift, whether it is from the exceeding gladness of its nature (as those who are very fond of a thing take pleasure in using its name), or that the great variety of its benefits has reacted for us upon its names. We call it, the Gift, the Grace, Baptism, Unction, Illumination, the Clothing of Immortality, the Laver of Regeneration, the Seal, and everything that is honourable. We call it the Gift, because it is given to us in return for nothing on our part; Grace, because it is conferred even on debtors; Baptism, because sin is buried with it in the water; Unction, as Priestly and Royal, for such were they who were anointed; Illumination, because of its splendour; Clothing, because it hides our shame; the Laver, because it washes us; the Seal because it preserves us, and is moreover the indication of Dominion. In it the heavens rejoice; it is glorified by Angels, because of its kindred splendour. It is the image of the heavenly bliss. We long indeed to sing out its praises, but we cannot worthily do so.

V.  God is Light: the highest, the unapproachable, the ineffable, That can neither be conceived in the mind nor uttered with the lips,  That gives life to every reasoning creature. He is in the world of thought, what the sun is in the world of sense; presenting Himself to our minds in proportion as we are cleansed; and loved in proportion as He is presented to our mind; and again, conceived in proportion as we love Him; Himself contemplating and comprehending Himself, and pouring Himself out upon what is external to Him. That Light, I mean, which is contemplated in the Father and the Son and the Holy Ghost, Whose riches is Their unity of nature, and the one outleaping of Their brightness.

(You can read the rest here: Gregory Nazianzen, Oration 40, The Oration on Holy Baptism)

You have to give the Greek Fathers credit for their emphasis on mysticism and beauty.  Now that is true Enlightenment!

And if you want a great contemporary talk about Baptism as the Door of the Spiritual Life, look no further than this one by Bishop Barron.