Today’s readings are, among other things, about God’s kindness to widows.  As a widow, I have a few things to say about that, but for the moment I actually want to describe how I was made a better Catholic by none other than those scallywags at The Chaser.   (For those of you who are not Australian, the comedians at The Chaser concentrate on political satire – almost always anti-conservative and anti-traditional-values.)

The reason I am raising this is that yesterday was the feast of the Sacred Heart of Jesus.  Several years ago (actually it would have been about 2007), we had a priest in the parish who had a great devotion to the Sacred Heart … and I had a difficulty with this devotion.  It wasn’t that I had an objection to the Sacred Heart per se, but more that it conjured up images of a style of art that offended my good taste.  The Jesus depicted in this particular genre of kitsch is usually a weak and effeminate Jesus who would definitely not make the rugby A team.  And artists have difficulties with interpreting the heart that is so central to this devotion – it appears either as an ugly fleshly pump, or reduced to a cartoon heart-and-thorns.  I think perhaps the only solution is to avoid realism and render it as an icon, along the lines of the beautiful mosaic in the Basilica of the Sacré Coeur in Montmartre.

So you see, my objection was on the most superficial level, and I was aware of this and wondering what to do about it.  Well the best answer I thought was to go straight to the source:  I decided to pray about it.  I said to God, “Look here, God,” (that was the way I used to pray).  “I am having trouble relating to this Sacred Heart caper.  The prayers are so gushingly sentimental and I’m a bit embarrassed by the paintings, which you must admit are not in the most sophisticated of taste.  Now, I am a reasonable person, and I think I am prepared to admit that I may be wrong.  Perhaps you are the sort of God who isn’t an art snob.  If so, I want you to tell me clearly.  I would like you to reveal to me whether I should give a bit more support to these Sacred Heart devotions.  Tell you what, I’ll give you two weeks, and you will have to make it obvious to me that the Sacred Heart is important.  And – second condition – you will have to reveal this to me through a source that is not Catholic!”

Well, not two weeks had gone by when I was watching The Chaser on the ABC.  And what should come up but mockery of the Catholic Church.  In particular, mockery of people who experience pareidolia – seeing images of Jesus or the saints in natural phenomena: plastered walls, tortillas, intergalactic nebulae and cinnamon buns.  Except the item they chose to ridicule was the Sacred Heart, and not the Sacred Heart appearing ephemerally in the clouds or even in an Indian chapati, but they made great play of zooming in on an image of the Sacred Heart embedded in a simulated lump of human excrement in a toilet bowl.

I was shocked and disgusted – shocked at the Chaser being so totally crass and objectionable (I shouldn’t have been, that is their MO).  And more shocked that Jesus had exactly answered my prayer!  I felt that he was saying to me: “OK. Here is the Sacred Heart.  Here is your non-Catholic source.  This is how they treat me.  And all I offer them is love.  Yet they choose to mock me, reject me, and reject those of my followers who have a simple and trusting loyalty to me.”

After that I was sad – sad about my arrogance, my snobbery, my tendency to look down on those aspects of Christianity that appeal to the ‘less cultured’ or ‘less intelligent’.  I was in danger of being a Pharisee.  Since then, I have found more and more occasions to respect those who don’t have delusions of grandeur.  By the way, I no longer watch The Chaser.  I think my time is more usefully spent offering novenas to the Sacred Heart of our Lord.  He is the one who bends down so lovingly to respond to all our needs.

Just as a postscript, in 2011, my husband and I discovered a pub where you can enjoy a beer and honour the religious kitsch style at the same time.  This is the café In den Ouden Vogelstruys (At the Home of the Old Ostrich) in Maastricht, just across the road from the Basilica to our family saint, Saint Servatius. 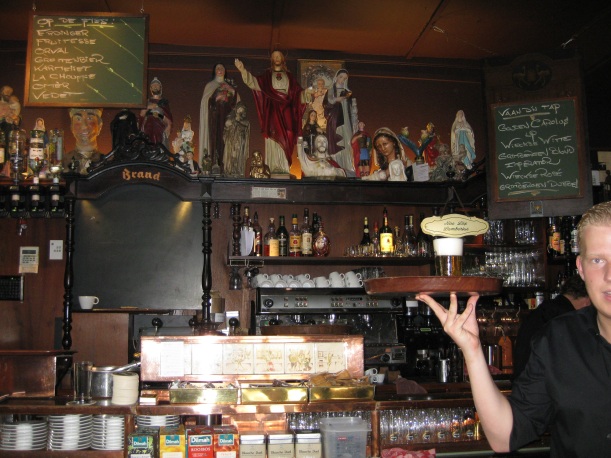