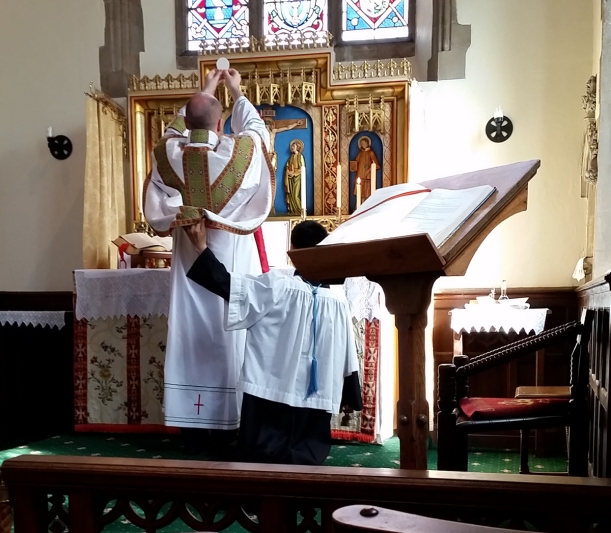 Mass in the Basilica of Our Lady of Walsingham (The Slipper Chapel), with Fr Michael Collis and altar server, Joshua Clovis.

“That isn’t just any manky old boot, mate.  It’s a portkey,” say the Weasley twins in the film version of J.K. Rowling’s Goblet of Fire.  Portkeys, in case you don’t know, are ordinary, unobtrusive objects which have the ability to transport wizards from one place to another.  For example, the Weasleys use a portkey which to all intents and purposes looks like an old boot, to transport them to the Quidditch World Cup.  The reality is that the old boot, lying as if discarded on the hillside, is not just an old boot – in Aristotelian terms, it’s appearance or ‘accident’ is that of a boot, but its substance is that of a powerful magical object.

My point is that even children have no difficulty in distinguishing between ‘substance’ and ‘accident’ – or between what something really is and what it looks, smells, sounds, feels like or appears to be on a molecular level, so let us not imagine that the concept of transubstantiation is too difficult for children to understand.  That is what today’s Solemnity of the Most Holy Body and Blood of Christ is all about: that the Eucharistic elements are transformed truly and substantially into the most holy Body and Blood of Christ.  That is why St Paul is so clear about our needing to examine ourselves prior to reception of Communion.

Everyone is to examine himself and only then eat of the bread or drink from the cup; because a person who eats and drinks without recognising the body is eating and drinking his own condemnation. (1 Co. 11:28-29)

J.K. Rowling says that she was the only one of her family to attend church regularly – she herself admits that many of her themes are derived from Christian ideas.  What isn’t generally acknowledged is the Catholicity of much of her thought: think of the Patronus figures, the sacramentality of objects, the extensive use of Latinesque words, the celebration of deathdays, the belief in the power of words to effect some metaphysical transformation, the suffering hero, the immortality of personal and subsistent souls.

We Catholics have something precious many other Christians don’t have – the presence of the supernatural in our Mass.  Our churches are not just halls or gathering places.  They are physical and particular locations of Christ, supernaturally physically present in what appears to be ordinary bread and wine, either in the tabernacle or during Holy Communion.

This calls to mind a House Blessing at which I was recently fortunate enough to be present while on holiday in England (this is why I haven’t posted for a while).  House blessings are another example of Sacramentals that bring the supernatural into the present and the ordinary.  The Blessing was of the new EWTN studios for Great Britain at Annunciation House in Walsingham, where my brother, Norman, has taken up residence as Producer.  The family live on the upper two floors, while the studio uses the ground floor and the cellar.  Walsingham is as medieval a town as you could imagine, and the destination of pilgrimages in honour of Our Lady of Walsingham, who appeared in ecstatic visions, to an English noblewoman, Richeldis de Faverches, during the 11th century. 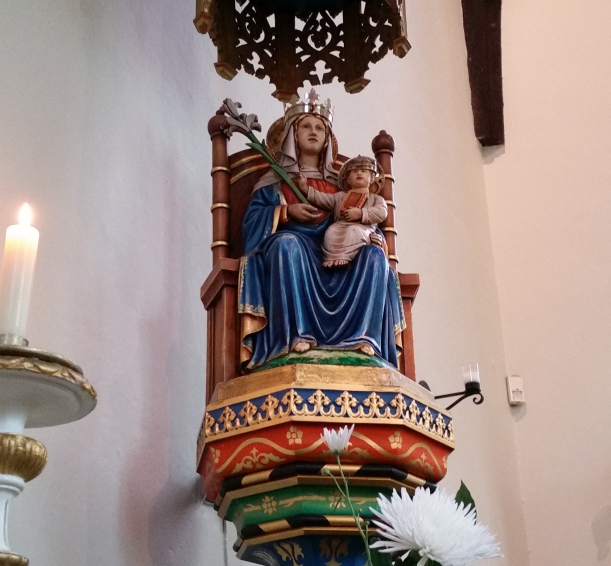 Statue of Our Lady of Walsingham in the Basilica (Slipper Chapel).

One would imagine that a House and Studio Blessing for the largest religious media network in the world would be accompanied by pomp and ceremony – and indeed there will be an official Blessing with Michael Warsaw, the Chief Executive of EWTN, later this year.  However, this didn’t stop Monsignor John Armitage, rector of the Shrine of Our Lady of Walsingham, from proceeding with this simple house and studio blessing – appropriately on the Feast Day of Our Lady of Fatima during the centenary year of the Fatima apparitions.  Typically Catholic, it juxtaposed the ceremonially Sacred with the ordinary and joyful chaos of family life – indeed there were more children present than adults: all my nephews and nieces, some in their more formal church clothes, some still barefoot and dishevelled after walking the two miles to and from the Slipper Chapel (where it is said that medieval pilgrims removed their shoes on the way to the Shrine), and interrupted all through by the squeals and grunts of my newest niece, Amelie.  It was a wonderful homely scene, a reminder of the beauty of ordinariness shot through by God’s grace – and in many ways it reminded me of those homely scenes of that other chaotic but loving family, the Weasleys, with whom I started this piece. 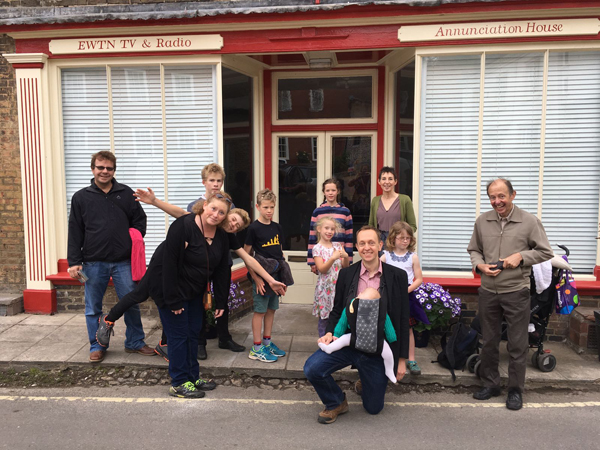 The EWTN (GB) Studios at Annunciation House, Walsingham, with Norman and Amy Servais and their family.

View over Friday Market, Walsingham, from my attic window.