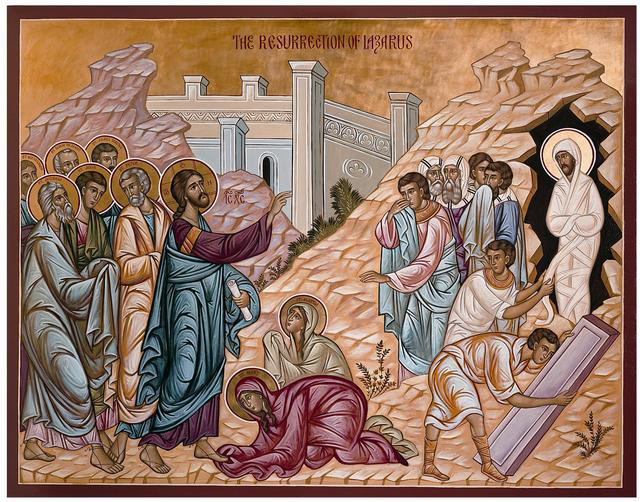 The Raising of Lazarus

This week I will continue answering a question from one of the readers of these posts, this time focussing on the middle section, concerning whether the Christian Bible condones rape:

Why don’t Christians condemn the parts of their Bible that instruct non-believers must be killed.  While they are at it they could do the same about the bits that condone rape and the bits that say gays must die.

I was somewhat bemused by the claim that the Bible condones rape, as most people understand the Bible to be strongly opposed to sexual sin, so I had to resort to consulting an atheist website with the congenial and obviously impartial name, The Bible is Evil, to discover our reader’s likely sources.  It turns out that this website lists a number of examples from Judges, Deuteronomy, Numbers and Exodus which, according to the author, support rape.   I will take just one of these by way of illustration and look at some general principles of interpreting Scripture, and leave some references which deal with the other examples.

The first example involves a rollicking yarn from Judges 21, concerning the rape of the daughters of Shiloh by the men of the tribe of Benjamin.  Most Catholics who are not regular readers of Scripture are probably unfamiliar with this story, as the Catholic Lectionary for Sundays and Major Feasts includes not one snippet from the Book of Judges, and the weekday readings cover less than 10% of the entire content of the book (Lectionary Statistics by Felix Just, S.J.).  This leaves Catholics somewhat unarmed for assaults from atheists on some of the more intemperate parts of the Old Testament.

To answer our reader’s question and provide some context, I will give a brief(ish) synopsis of the tale, which begins back in Judges 19.

The story begins with an unnamed Levite from Ephraim who has a slave wife – or concubine.  Although concubinage was common in the Ancient Near East, in the Bible it is never described with approval.  Jewish readers would understand immediately that the fact that the Levite has a concubine is a blemish on his character.  This concubine has made an escape from her master to return to her father’s home – in Bethlehem of all places – and after a leisurely four months, the Levite finally decides to make the journey to recover her.  We get a hint of why she might have run away from her master as his character is revealed in the story.  To cut a long story short, the Levite gets along swimmingly with the concubine’s Dad, and the two of them spend the next several days eating, drinking and making merry far into the evening (while the concubine seems to be completely ignored).  Finally, the Levite manages to tear himself away from the insistent father and makes his way back to Ephraim, together with the concubine, a servant and two donkeys.

When they start off, it is already late, and the light is failing as they approach Jerusalem.  The servant sensibly suggests they stop there for the night, but the Levite turns up his nose at staying in what was at this time a city occupied by Jebusites – non-Jews, and moreover, descendants of the cursed line of Canaan (see Genesis 10) – and opts to head to the next Israelite town of Gibeah, in Benjamin.  By the time they reach Gibeah, night is falling, and as they wait in the town square for someone to offer them hospitality, their chances of finding it are slim.  Remember street lighting was not a given at this period in history.  As luck would have it, an old man comes along and offers them a place in his house.  Levitical law made it obligatory for Jews to offer hospitality, even to foreigners: “If you have resident aliens in your country, you will not molest them. You will treat resident aliens as though they were native-born and love them as yourself – for you yourselves were once aliens in Egypt.”  (Lv 19:34)

But just when they have settled down to dinner indoors, we discover that Gibeah is not the safe place the Levite thought it was.  In a scene reminiscent of Sodom, an unruly band of men surround the house, wanting to pack-rape the Levite (as one does).  The old man and the Levite prove themselves cowardly in the extreme, for to get themselves out of this tricky situation, the old man suggests they substitute his daughter, while the Levite ends up giving them the concubine to do with as they please.

They had intercourse with her and ill-treated her all night till morning.

In the morning, the concubine, after a night of being violently gang-raped, drags herself to the door of the house, where in great distress, she dies “with her hands on the threshold”.

Meanwhile, the Levite, astounding us with his indifference to her plight, appears to have had a good night’s sleep!  The tranquillity of the Levite is masterfully juxtaposed with the horror of the scene that has just occurred:

This is all the more appalling when we remember that Levites had a sacred calling and were the tribe set apart for service of the sanctuary.  Jesus himself is not above criticising the hypocrisy of certain Levites (Luke 10:32), and perhaps this Levite is typical of those priests and Bishops who in our own age have been indifferent to reports of sexual abuse or even complicit in such activities.  But I digress.

Without feeling a ounce of self-reproach, the Levite hauls her body home on his donkey, and proceeds to cut her up into twelve pieces, distributing the parts countrywide to each of the twelve tribes, with the message,

Has anything like this been done since the day when the Israelites came out of Egypt until today?

Instead of examining his own conscience, his purpose is to stir up the vengeance of all Israel against the men of Benjamin, and he succeeds, as representatives from all the tribes (except Benjamin) gather at Mizpah and declare that they will not let this injustice go unpunished.

When the Benjaminites refuse to hand over the rapists from Gibeah, full scale war breaks out, and to cut a long story short, after two days where Benjamin appears to be getting the upper hand, the Israelites get strategic and draw the Benjaminites away from Gibeah to a place where they can be hemmed in and massacred, while in the meantime other Israelite troops ambush Gibeah, killing the inhabitants and setting the town alight.  Only 600 men from Benjamin remain, having escaped into the desert.

With all the mishegoss of a Woody Allen movie, the Israelites are suddenly struck with Oy vey iz mir about the fact that they have practically wiped out one of their own tribes,

Yahweh, God of Israel, why has this happened in Israel that a tribe should be missing from Israel today?

One imagines God going *ultimate headdesk*.  (Er … because you killed them, stupid.)

So the Israelites decide that they need to ensure they provide wives for the remaining Benjaminites in order that the tribal remnant might not die out.  Well, they can’t provide wives from among their own daughters, as they have previously made an oath not to contaminate their families with the murderous Benjaminites, so they come up with a plan to steal all the virgins from the one town in Gilead that had not gathered in Mizpah – having slaughtered everyone from that town outside the category of virgin – but this provides only 400 women for 600 men.  They make up the balance by telling the men of Benjamin to seize the girls from Shiloh as they come out to dance at the annual festival (these are the rapes mentioned by our reader).  Having done this, the Israelites all return home, and the Benjaminites are free to rebuild.

What are we to make of this unedifying story?

Atheists and anti-theists tend to think this way:

But to the Biblical exegete, that’s not what the book of Judges is about.  One has to understand the intention of the author, and in this case, he is quite clear.  We have the repeated verse regarding good leadership:

The generations after Joshua have forgotten God, are lacking good leaders, and have resorted to doing whatever they like.  The entire book of Judges describes a repeated cycle of the Israelites turning away from God to worship the gods of the Canaanites, being humiliated by their enemies, being rescued by the Judges, having a brief period of peace, and then falling back into sin.

The Israelites then did what was evil in the Lord’s eyes and served the Baals.  They deserted Yahweh, God of their ancestors, who had brought them out of Egypt, and they followed other gods, from those of the surrounding peoples … He delivered them to the enemies surrounding them, and they were no longer able to resist their enemies …  so that they were in dire distress.  Yahweh then appointed them judges, who rescued them from the hands of their plunderers … But once the judge was dead, they relapsed into even worse corruption than their ancestors.  They followed other gods; they served them and bowed before them … (Jg 2:11-19).

Our reader asks why Christians don’t condemn the rape that is described in this book.  A better question would be, “How did you, dear reader, manage to miss these repeated sentences condemning evil?”

Perhaps the atheists who ask these questions are just indulging in the straw man fallacy, relying on the ignorance of their audience.  Or perhaps I am being cynical and the reader genuinely wants to know the true interpretation.  In fact, we could say with today’s reading from St Paul’s Letter to the Romans,

People who are interested only in unspiritual things can never be pleasing to God. Your interests, however, are not in the unspiritual, but in the spiritual, since the Spirit of God has made his home in you.

When it comes to active atheism versus total indifference, active atheism wins hands down, because at least it cares about asking the important questions.

At any rate, the point of Judges is to warn us about the consequences of evil and to show what happens when a society abandons God and does whatever it likes.  In fact, it is a book that is most applicable to our own time when relativism is the prevailing standard and everyone ‘does as they see fit’, without reference to God.

As far as the other claims go regarding rape verses in the Bible, I will refer you to Jimmy Akin’s treatments here:

Stay tuned for next week, when I will tackle part three of the question.

One thought on “5th Sunday of Lent, Yr A | A reader asks: Should we condemn parts of the Bible (part two)”